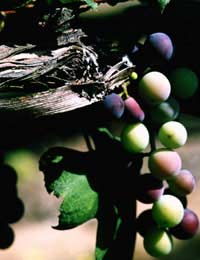 To many people Tuscany means Chianti. Not just the wine itself but the area of production with its hill-top towns, rolling hills and rows of Cypress trees dutifully standing guard by the side of B roads that criss-cross the landscape. The influx of English property buyers to the area in the 1980s saw it rechristened Chiantishire, but it remains more famous for its vineyards than the sunburnt faces of retired majors from Surrey and their phrasebook wielding wives.

To the area overseen by the Chianti Classico consorzio we shall return, but let's first visit a few of the famous towns in the region that are synonymous with the art of viniculture. Montepulciano claims references to its connection with wine dating back to 789AD. These days grapes such as prugnolo gentile and canalolo nero are used in the production of its Rosso di Montepulciano and the grander Vino Nobile.

To the west lies the equally famous southern Tuscan town of Montalcino. Here a strain of the sangiovese grape responsible for Chianti lends its name to the most celebrated of its red wines: Brunello.

For those who desire a quality white wine to sample while basking in the Tuscan sunshine, head north towards the town of the medieval towers, San Gimignano, where vernaccia grapes are used to make, you've guessed it, Vernaccia di San Gimignano.It was in the 1920s that a consorzio of producers was established to ensure the quality and promote the red wines of the Chianti Classico zone, which is marked by Florence in the north, Siena in the south, the Pesa valley in the west, and to the east the Chianti mountains. Its list of over 230 different wines includes 100 classified Riserva (i.e. aged for a minimum period of three years). The predominant grape variety is sangiovese with some blended wines exhibiting the influence of cabernet sauvignon and canaiolo. It should also be mentioned that outside the classico zone, there are a number of sub-zones, or sottodenominazioni, including Chianti Rufina and Chianti Colli Senesi.

A pleasant evening in the company of Tuscan wine would not be complete without a glass of sweet Vin Santo, made from trebbiano grapes. The dessert wine is usually served with a hard almond cantucci biscuits.

Umbria In the Shadow of Tuscany

Not surprisingly, neighbouring Umbria has suffered somewhat in the shadow of Tuscany but it does boast a couple of good red wines in Sagrantino di Montefalco and Torgiano Riserva. However the region is most famous for the white wine made from a blend of grapes including trebbiano and canaiolo that takes its name from the town of Orvieto.

Further east lies the region of Le Marche which faces out on to the Adriatic sea. In terms of reds, try both the Rosso Conero and Rosso Piceno. The Marchegiani are proud of their Verdicchio white wine, which makes an amiable companion along with a bowl of stuffed olive ascolane in the historic central square of Ascoli Piceno.

South of Ascoli lies the regional border with the Abruzzo, most famous for its Montepulciano grape used to make the wine that bears its name. It should not be confused with the eponymous wine of the Tuscan town of Montepulciano but along with Rosso Conero, made from the same grape; it is well worth investing in.