Italian Beers: What to Look For 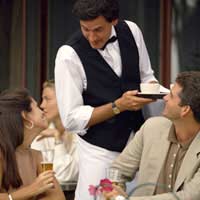 The Italians have mastered many arts down the ages but only relatively recently have they dipped their toe into the waters of commercial beer making, around the middle of the 19th century with the opening of the first Moretti and Peroni factories which provided the foundations for the nation's two most famous brands. Prior to that development, beer in the north of the country was produced on a local scale and consumption was, therefore, modest compared to the fruits of the countryside's abundant vineyards. Even today, the Italians, in common with almost every other country in the world, can only raise their glasses in appreciation to the undisputed home of brewing across the Alps in Germany

It was in 1859 that Moretti was founded in Friuli, a north-eastern region that always enjoyed close ties with the powers of central Europe, by a merchant involved in the trade of cereals and foodstuffs with neighbouring Austria. A decade earlier, in 1846, Peroni was founded in the Piedmontese town of Vigevano while the less high profile but no less celebrated Menabrea brewery was born in the same year, and the same region, this time in the town of Biella where it still has its headquarters to this day.

Like many of its rival brands, such as Dreher and Messina, as well as Peroni and Moretti, Menabrea now forms part of the one of the multi-nationals that dictate the present and future course of the global brewing industry, in its case the Forst Group. Nevertheless its operations are headed up by a descendant of the founding family, Paolo Thedy, ensuring that the principles behind the founding of the company are safeguarded.

Moretti Beers and "The Whiskered One"

Echoes of the past can also be found in the label attached to the Moretti range of beers. Featuring Il baffo, or the whiskered one, the inspiration for the illustration came from Leo Moretti who in 1942 spotted a man in his native Friuli enjoying a glass of his family's beer in a restaurant.

Moretti took a picture of the man which was later transformed by a graphic artist into the enduring image of the beer drinker and his trusty tankard. Indeed so typical was the man that when the image first appeared on the bottles, Italians wrote to the company, claiming that they recognised him. And even more typically, when Leo Moretti asked the man what he wanted in return for having his picture taken, he responded, “a glass of what I'm drinking is sufficient for me”.

While the big operators dominate the market, the enthusiasm of the devotees that produced casks hundreds of years ago is mirrored in the micro breweries that have emerged in the past two decades. Like the Slow Food movement, their aim is to celebrate and keep alive the traditional methods of making beer.

Nevertheless, beer consumption in Italy is small in relation to that of the countries of northern Europe. But in common with the nation's approach to everything involving food and drink, there are no half measures when it comes to ensuring that only the best will do.