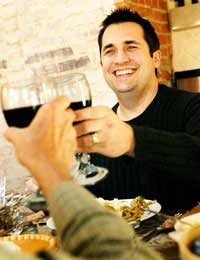 Rome's status as a “world city” means that all too often wines from Italian regions more celebrated for the quality of their vines as well as interlopers from France have been favoured over locally produced bottles from the Lazio region. Why? Well for one thing restaurateurs can charge more.

This state of affairs is unfortunate because in the hill towns or Castelli Romani, far removed from the bustle of the capital, winemakers have been quietly going about their business, ensuring that the average citizen of Lazio never has to want for a decent accompaniment to their lunch-time or evening meal.

Rome is the home of two of the nation's most famous dishes: carbonara, usually served with spaghetti, and saltimbocca, or veal escalope pan-fried with cured ham and sage. In line with the city's culinary tradition, these are earthy rather than refined, satisfying rather than sanctimonious. So what better companion than a bottle of dry white from the Frascati region south-west of the city.

Frascati: A Wine to be Enjoyed to the Full

Utilising a blend of grape varieties including malvasia di candia, trebbiano and bellone, the Frascati consorzio produces a stylish range of whites that have made the name one of the most recognisable around the world. Superiore some of them may be classed as, but at heart this is a wine to be enjoyed to the full rather than sipped reverently.

The Castelli Romani are the source of other whites, as well as a number of red wines, but it is not the only zone worth exploring in the company of a bottle opener. For example, the coastal area of Tarquinia, north of Rome, uses the same grapes for its still and sparkling white wines as Frascati, while the reds exhibit the influence of sangiovese, montepulciano and cesanese.

Taurasi Gives Barolo a Run for its Money

Three of Campania's most famous products also flourish far from the bright lights of the big city, in this case Naples. Heading east brings you to the area around the town of Avellino where two grape varieties, Greco and Fiano, are responsible for the eponymous white wines. Another celebrated local wine, this time of the red variety, is Taurasi. Made from the aglianico grape, the best examples are said to give Barolo a run for its money. Or is that just the drink talking?

Another strongly opinionated red is Salice Salentino, which originates from the region at the heel of the peninsula, Puglia. Made from the negro amaro grape, Salice may take most of the plaudits, but spare some time for Primitivo di Manduria and the straw coloured white wine called Galatina.

At the other end of the foot of Italy lies Calabria, where the area around the village of Cirò produces red, white and rosé wines using the alberello, greco bianco and gaglioppo grapes.

Red and White Wines Away From the Mainland

Off the Italian mainland, Sardinia is rightly proud of its white Vermentino di Gallura which is grown in the region around the Costa Smeralda, whose well heeled visitors carry the financial clout to afford the best examples. Cannonau is produced throughout the island, and as such it is the quality red of choice on every table.

The red Faro wine from the north of Sicily as well as the white and rosé from the slopes of Mount Etna make for a pleasant interlude on the island while the evening's festivities at the table should always end with one of the sweet dessert wines, such as Moscato di Pantelleria, of which the region is rightly proud.