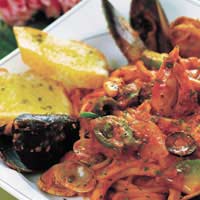 The passion that Italians bring to the kitchen is reflected in the language that they use to describe techniques and individual ingredients or recipes.

Antipasto - Translates as before the meal i.e. pasto, and not before the pasta as some mistakenly believe. A selection of antipasti can be modest or extravagant, depending on how generous the host is feeling that day. But remember that, as in all aspects of Italian food, quality is always more important than quantity.

Arancine - These 'little oranges” are as vibrant and bright as the Sicilian landscape from which they originate. In reality they are rice croquettes, perhaps stuffed with veal or a soft cheese such as caciocavallo or cow's milk mozzarella. Their orange hue originates from the addition to the short-grain rice of saffron and the subsequent frying in vegetable oil.

Battuto - The action of the knife striking the base ingredients against the cutting board, in short the first stage of the preparation of any dish, which requires basic but nevertheless efficient skills with a sharp blade.

Besciamella - More commonly referred to in the French form, béchamel, this sauce of butter, flour and milk, with perhaps the addition of some nutmeg, is combined with a range of baked pasta dishes as well as side dishes of vegetables such as cauliflower. One of the easiest sauces to get right, it can all too easily go wrong as well - either too liquid or the culinary equivalent of glue. Practice makes perfect.

Bufala - The water buffalo of the southern region of Campania which envelops Naples are the bountiful producers of the softest, creamiest form of mozzarella cheese. Supremely delicate in flavour, spare it the intense heat of the pizza oven in favour of a simple salad where it will repay kindness many times over.

Burro - Butter is traditionally viewed as the favoured fat of the pampered north of the country where it is used for sautéing as well as being an accompaniment to bread. Has been rather overshadowed in recent years by the onward march of the more fashionable olive oil.

Contorni - Accompaniment to the meat or fish course of the meal, usually consisting of one or two plates of prepared vegetables such as green beans, spinach or braised fennel. The more indulgent will be glad to know patate fritte, or chips, also come under this heading.

Crostino - Quite simply, toasted bread topped with whatever takes the fancy, for example porcini mushrooms, roasted peppers or chicken livers. The crostino is a native of Tuscany and is a more well appointed relative of the Roman bruschetta.

Fiorentina -Not the financially troubled Tuscanfootball team that recently returned to Serie A afterbeing relegated to the lower leagues, rather asubstantial slab of meat roughly equating to anAmerican T bone. Not to be tackled without a bottle ofrobust red wine, and a hearty appetite, obviously.

Insalata - The salad course is usually positionedbetween the main (meat or fish) course and thedessert, and can consist of a simply bowl of greenleaves or something more elaborate. Olive oil combinedwith freshly squeezed lemon juice and a little seasoning, or perhaps balsamic vinegar used sparingly,is all that is required to make the perfect dressing.

La Grassa - Along with left-wing politics, whichgained it the nickname of La Rossa, or the red, thecity of Bologna is famous for its ingenuity with andlove of food (grassa means fat). No understanding ofItalian food is complete without a visit to the cityand an exploration of the side streets that lead offthe main Piazza Maggiore, where the adventurous willfind delicatessens and osterias to satisfy even thebiggest of appetite.

Primo - The first of the principal courses, hence thename, it usually involves a risotto or baked pastadish.

Saltimbocca - Literally “jump into the mouth”, thisdish of veal accompanied by prosciutto crudo, or curedmeat, and sage, all held together by a skewer andbathed in white wine, perhaps even some marsala, is anative of Rome. Serve with a simple accompaniment ofgarden peas.

Secondo - Some would say the star of the menu, whetherthat be in a restaurant of at a dinner party. Thesecond main course, it can consist of either meat orfish.

Soffritto - Forms the foundations of every dish,whether that be a pasta sauce or a more substantialbraise of beef or lamb. In short, finely dicedcarrots, onion, garlic and celery, or any combinationof them depending on the recipe.