Home > Italian Cuisine > Have You Got the Stomach for a Lampredotto?

Have You Got the Stomach for a Lampredotto? 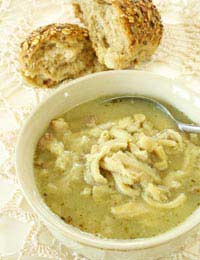 Millions of people flock to Florence every year to file past Michelangelo’s David and wonder at the treasures of the Uffizi and the Duomo, whispering reverentially about these jewels of the renaissance capital. However just down the road stands the real heart of the city, the Mercato Centrale, a place where whispering gets you nowhere amid the shouts of traders and customers alike.

The sensory overload to be found within is completed by sights and smells from the multitude of stalls overloaded with ingredients from across the region of Tuscany. There are the cured hams and cheeses, bistecche that have made fiorentina a byword for a fantastic steak, as well as staples such as fresh fruit and vegetables, pasta, rice, pistachios and walnuts.

Nothing, one would have to say, that is going to turn the stomach of the average tourist. That is, until they turn a corner and are confronted by a tray of pig’s trotters. Or perhaps worst of all the milk-white layers of tripe – stomach - that are synonymous with the city’s culinary heritage. It would be fair to say that tripe is something of an acquired taste, and one that many more sensitive souls would take one look at and decide they had no intention of acquiring. But nose to tail eating, making use of every part of the slaughtered animal - thereby paying due respect to it by not wasting anything - is the essence of the rustic tradition that forms the bedrock of Italian food.

Trippa alla fiorentina, however, is not the only show in town for those in search of the true Tuscan offal experience. An equally popular contender for top billing is lampredotto, sold from one of the stalls at Mercato Centrale that ensure shoppers don’t go hungry while they are picking up the essentials for the evening meal. So what is lampredotto? There’s no easy way to say this, so with apologies to the more squeamish it is the fourth stomach of a cow, known as the abomasus.

Topped with a salsa verde

The cooking process involves simmering for a number of hours in a liquor containing onions, carrot, celery and tomato. Once the offal is cooked it is sliced and served in una rosetta, or round roll, topped with a salsa verde. The vendor will ask the customer whether they want the roll dipped in the cooking liquor before handing it over – a ritual which is answered in the affirmative by those considered connoisseurs of this form of street food.

Not surprisingly lampredotto is not to everyone’s taste, and it is not uncommon to see tourists who have handed over a few euros for their bun taking a quick bite before depositing their purchase in the waste bin. Some, however, do fall for its charms, although declaring it “offal good” leaves a lot to be desired in terms of originality.

Lampredotto is as much a part of Florence’s past and present as the frescoes, churches and palazzi that the city boasts in abundance. It you want to be considered a true Renaissance man or woman, then make room for one around lunchtime. It may be the start of a beautiful relationship.