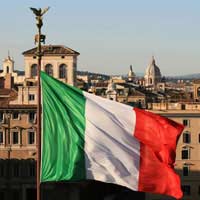 From the far north-eastern region of Alto Adige that reflects the influence of its near neighbour Germany to the southernmost tip of Sicily, close to the coast of the African continent, a journey down the 'boot' of the Italian mainland and across to its islands offers infinite variety to the hungry traveller.

Naturally, geography is the key to what you are going to find on your plate. So the inner plains and mountains that serve up beef, pork, and lamb give way to the catch of the day around the lakes and towards the coast. In part the food and wine of individualregions reflects the climate, too, so the heavier meat sauces and risottos of Lombardy, Piedmont and Emilia Romagna give way to lighter offerings such as pasta with baby clams as you head south.

The Role of Varying Seasons in Italian Food

The seasons also play their part. Around Turin, autumn brings with it the promise of freshly shaved truffles on pasta and rice; in Campania it calls for the opening of a robust red to accompany a freshly shot wild boar. Similarly economics shaped the long standing tradition of using butter in the north, cheaper oil in the south, for frying. Local character is important, for example in the tomato, bacon and chilli pepper of the Roman amatriciana and the even earthier puttanesca, or whore's pasta, that can be found plying its trade in the trattorias of Naples. The city in the shadow of Vesuvius also lays claim to the pizza, and in particular the tomato, mozzarella and basil combination that takes its name from Queen Margherita.

Again the more basic Roman offering of bruschetta, or griddled bread, contrasts with the more refined crostini of Tuscany which are adorned with treats such as porcini mushrooms or sautéed chicken livers. To the west of Tuscany lies the coastal region ofLiguria, whose abundance of basil plants has brought it worldwide fame as the home of pesto.

In terms of snacks or starters, Sicilians may tempt you with a plate of arancini, deep-fried rice balls stuffed with mozzarella, while a similar approach using olives is the preference of the good people of Ascoli in the Adriatic region of Marche. Whether either offering could compete with a plate of cured San Daniele from Friuli or the ham that has made Parma world famous is questionable.

Florence gives its name to the most famous of tripe recipes but the likes of Naples also have a fondness for one of the less glamorous cuts of offal. Certainly anyone who has seen sheets of it laid out on the stalls of the central market in Florence could beforgiven for deciding they would prefer not to sample something that resembles nothing less than a bath mat.

If it's a slice of cake that you have in mind, then Florence's ancient rival, Siena, lays claim to the best panforte while Milan's panettone, traditionally a Christmas treat, has become a year-round indulgence across Europe.The demands of the tourist trade mean that the more famous dishes are served up across the country but it is those regional specialities that provide a true flavour of your surroundings.