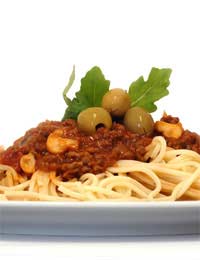 A special ambassador will be bringing Bologna to the tables of thousands of restaurants in 70 countries across five continents, announced the city’s local paper, Il Resto Del Carlino, earlier this year. The ambassador in question, reported the paper, was ragù alla Bolognese, a dish more commonly known across those aforementioned five continents as spaghetti Bolognese.

In a city that lays claim to some of the iconic creations of the Italian kitchen; indeed, in a region – Emilia Romagna - that boasts more food products given the stamp of approval by the European Union, including balsamic vinegar and parmesan cheese, than any other corner of Italy, the choice of ragù Bolognese as the culinary creation to promote the 2010 Giornata Mondiale delle Cucine Italiane (International Day of Italian Cuisines) organised by the Virtual Association of Italian Chefs (GVCI) was seem as the opportunity to finally exorcise the demons that have dogged the dish for decades.

In short the good people of Bologna, indeed all Italians concerned with the country’s culinary heritage, have become more than a little dismayed over the years at the sight of this simple yet specific creation being adulterised.

Foundations of the Dish

One clue to how this ‘crime’ has been perpetrated lies in the label spaghetti Bolognese. The original recipe calls for the flatter, wider tagliatelle pasta to serve as the foundations of the dish, rather than the rounded threads that have their origins in cities such as Genoa and Naples. Dismissing such attempts at counterfeiting the dish, a spokesman for the agricultural industry’s organisation Coldiretti lauded the GVCI initiative as one designed to “reaffirm the historic identity of the one of the most delicious dishes of the Emiliana tradition, dating from the Medieval era, and distinguish it from an invention for foreigners, readily available abroad but totally unknown in Italy, like spaghetti Bolognese, which comprises a dish of tomato sauce and meatballs”.

Some may wonder why the temperature of the debate should reach boiling point over the minutiae of a recipe, but Italian food, in common with many a proud cuisine around the world, has every right to protect its heritage and defends itself against the globalisation of taste. GVCI honorary president Rosario Scarpato rightly pointed out the commercial considerations, too: “It’s an initiative promoted by Italian chefs abroad, who are the ones who maintain the identity of Italian cuisine on international markets. Without this identity, it would be very difficult to sell food products ‘Made in Italy’ abroad.”

Any further evidence that this was a just cause can be found in the recipe for a true Bolognese ragù. Except, not surprisingly, a true ragù is something of a matter of opinion even amongst the cognoscenti – whether or not, for example, to add nutmeg or bacon; whether or not to use beef mince or a combination of beef and pork. Suffice to say you are unlikely to go wrong if you combine beef mince with a soffritto of onions, celery and carrots before adding 250 millilitres of milk followed by a tin of tomatoes and a dash of good quality white wine (the milk works to tone down the acidity of the tomatoes and the wine). Turn the heat down to the merest of simmers, place the lid on your pot and let the sauce develop over the course of at least a couple of hours.

Toss individual servings of tagliatelle and sauce together before plating, and carry to the table where a bowl of freshly grated parmesan should be waiting. The clean plates at the end of the meal should be evidence enough that the struggle to preserve ragù alla Bolognese is a food fight well worth waging.