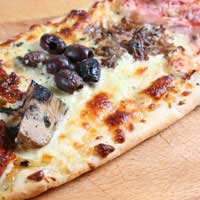 It would be ever so romantic to suggest that the quattro stagioni or four seasons, took its name from the collection of violin concertos by the Venetian composer Antonio Vivaldi. Unfortunately the truth is a lot more mundane, referring simply to the four sections that offer the diner contrasting tastes. Of course, those determined to make the musical connection can always light a few candles and throw on the CD in a bid to woo their prospective partner. However it is debatable whether pizza could ever be classed as a food of love.

A Well Constructed, Crisp Base

So what is the correct way to construct a quattro stagioni? Well, the European Union has not got round to addressing this particular issue, so in the absence of a consorzio overseeing authenticity, it is not surprising to report that it's a case of whatever takes the chef's fancy.

It is generally agreed that the starting point should be a well constructed, crisp, thin base adorned with a thin layer of tomato sauce, in other words the foundations of 90 per cent of Italian pizzas. Then take the point end of a knife and roughly section out the oval base into four. Ensure that the remaining ingredients are to hand because once the tomato sauce has been spread on the raw dough, the time spent out of the oven should be kept to a minimum to ensure the latter does not become soggy from the juice of the cooked fruit.

The Delicate Taste of Buffalo Mozzarella

Now for the remaining ingredients. As mentioned above, what you find on top of your four seasons can vary. Capers and anchovies have been known to make an appearance, while even one boasted the addition of mussels. As a rule, it usually consists of a combination of cheese, vegetables and meat, so let's settle on some buffalo mozzarella, cooked ham, or prosciutto cotto, artichoke hearts and field mushrooms.

While the delicate taste of buffalo mozzarella and its high water content makes it a debatable choice for use on a standard pizza, the fact that the cheese is allocated its own section on a quattro stagioni means we can indulge ourselves and allow its creaminess to enjoy a share of the limelight. In contrast, while cooked ham is very definitely an inferior product to the cured varieties, it will stand up to the rigours of the oven. Better to keep those precious slices of San Daniele or Parma for the antipasto.

If Extravagance is the Order of the Day

It would be extravagant, not to mention unnecessary, to tackle a bag of globe artichokes in order to add a vegetable section to the pizza. A portion of hearts can be obtained from many delicatessens as well as being available in glass jars on the supermarket shelves. Finally the mushrooms, preferably the large cap field variety for their taste, although again if extravagance is the order of the day, mix in a few dried porcini reconstituted in warm water.

Take the field mushroom, remove the stalk, then lift up the skin from under the cap and peel it off. Slice thinly and sauté in butter and oil with a grinding of salt that will encourage the mushrooms to release their water content.

All that's left to do is place each of the four toppings in their allotted space, bake in a hot oven for around 15 minutes, then serve. At the very least, the strains of Vivaldi will mean your companion won't have to sing for their supper.