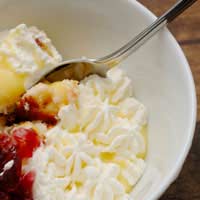 Zabaglione and tiramisu may grab all the headlines when it comes to popular Italian desserts but neither possesses a name as intriguing as English soup, or zuppa inglese. Whether the name is the result of its introduction into Italy by English travellers in the 19th century, or its invention in Florence by the servants of wealthy English residents is a question for the historians. All cooks will want to know is, what is it? The answer is that the recipe translates roughly as a trifle; in other words a combination of sliced medium density cake, a custard, or crème anglais, sauce and a judicious amount of alcohol.The spirit used to liven up the zuppa inglese depends upon what is to hand. Some recipes may espouse, brandy, others cherry liqueur. A fortified dessert wine such as marsala could equally do the trick. But in this case, amaretto, an almond-based liqueur from Saronno in the Lombardy region, will suffice.

Drizzle the Sugar into the Eggs

To begin, the dessert, based on servings for six people, make the custard sauce.

A Blanket of Good Quality Chocolate

Now to assemble the dessert:

The more ambitious could attempt to invert the glass bowl in the hope that the dome will slide out and retain its shape on a presentation plate. But even if the result is a spectacular collapse, this will not affect the delicious taste of the finished dessert.