Which Italian Cheeses to Serve? 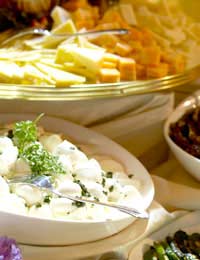 Cheese plays a pivotal role in the Italian eating experience. Not only is it served on its own or accompanied by fruit or perhaps a drizzle of honey as a dessert course but it is influential in a great many other parts of the meal. Buffalo mozzarella can add its creamy texture to a plate of cured meats as antipasti, while the more humble variety made from cow's milk tops pizzas the length and breadth of the peninsula. Parmigiano reggiano or pecorino romano may well accompany the pasta or risotto course, while ricotta, if not starring in a dish of ravioli or cannelloni, may find its way into a slice of torta della nonna on the sweet trolley. Mascarpone, meanwhile, is synonymous with tiramisu.

As with many other aspects of the nation's cuisine, the cheese that is served will depend to a large degree on the geographical location. Pecorino, for example, refers only to the fact that it is made from sheep's milk, and while the more widely available table versions are labelled Sardo and Toscano, denoting their origins in Sardinia and Tuscany, respectively, the Sicilians will tell you that their equivalent has been celebrated since classical times.

The Mediterranean islanders are also fiercely proud of Ragusano, which hails from the districts surrounding Syracuse. The table variety is eaten at a young age when it is sweet on the palate. Seemingly a world away from Sicily, in the colder northern region of Lombardy, is a similarly buttery sweet cheese made from cow's milk, taleggio. The latter, sometimes called stracchino, has become increasingly available in northern Europe and sports a distinctive pinkish-orange crust that provides a dramatic contrast with the pale body, or paste, within. The shy and retiring taleggio is the antithesis of the brash exterior and taste of its fellow Lombardian, Gorgonzola, named after the town on the periphery of Milan that claims it as its own.

Nuttiness and Versatility of Parmigiano and Caciocavallo

South of Lombardy, the Emilia Romagna region has nothing to prove in the cheese stakes, being the home of parmigiano reggiano, whose grainy nuttiness and versatility make it indispensable in any Italian kitchen, and which warrants its own section on this site.

Equally worthy of note, if not commanding the international fame and fortune of parmigiano, is caciocavallo. A semi-hard cheese manufactured from cow's milk, it is made in a number of southern Italian regions such as Puglia and Campania. Cavallo is Italian for horse, which has led to speculation that the name derives from the cheeses being hung up to age in pairs, like the legs of a rider in the saddle. Others believe the name originated from the fact that it was originally manufactured using mare's milk.

Whatever the time of the day, and wherever the hungry traveller happens to find themselves, it is a safe bet that there will be cheese on the table. The Italians have a cheese-making tradition of which they are rightly proud, and which deserves the full attention of the diner, whether they be in a trattoria in Trieste or a ristorante in Reggio Calabria.