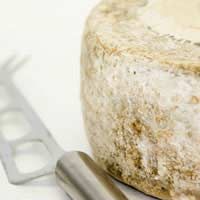 Manufacturers of pecorino could be forgiven for casting envious glances up the Italian peninsula towards their fellow cheese makers in Emilia-Romagna who bask in the reflected glory of Parmigiano reggiano.

Because of the two it is Parmigiano that is viewed as the more elegant and glamorous, the English translation of its name, parmesan, having almost developed into the generic term for any form of cheese grated over pasta or risotto. Certainly it is true to say that the cow's milk cheese is a more refined character, reflected not least in the price it commands in the supermarket or delicatessen. But put it on the streets of Naples, or more accurately on the table of one of the southern city's trattorias or osterias, and ask it to hold its own with some fresh chilli and anchovies? It would be back on the first train north, pronto.

It is the more gutsier dishes where the saltier, sharper matured pecorino cheese comes into its own. Made using sheep's milk, from where it derives its name, younger pecorino is served as a table cheese because it is softer and sweeter than wheels that have been given the time to attain more maturity.

Whereas there is one consortium responsible for the production of Parmigiano, there are four separate bodies charged with ensuring the quality of pecorino produced in Italy.

Il Consorzio per la Tutela del Formaggio Pecorino Romano is responsible for perhaps the most famous form of the grating cheese and oversees the production methods of manufacturers in the Lazio region, the island of Sardinia and the Tuscan province of Grosseto. Sardinia also boasts another organisation concerned with producing pecorino, namely Il Consorzio per la Tutela del Formaggio Pecorino Sardo, which has its own list of favoured producers and releases cheeses with either a green or blue label designating the age as either a dolce or maturo variety, respectively. The milder dolce cheese usually completes the process of maturing inside three months while a minimum four months is required before its stronger and darker coloured cousin is ready.

Consortiums also administer the production of cheese made from sheep's milk in both Tuscany and Sicily. All four of them are allowed to stamp the DOP mark on their cheeses, which indicates that the area of production has been designated a Denominazione d'Origine Protetta by the European Union.

What these EU seals of approval guarantee is not only that the individual cheese is of a high quality but that the geographical area from which it originates and the craftsmanship involved is recognised, the aim being to preserve the integrity of the product. Although specific aspects of the production process will have changed in line with the advancement of manufacturing technology, the basic principles of producing pecorino remain the same, a philosophy that is shared by makers of other types of cheese throughout Italy and the rest of the EU zone.

So while the taste of grated pecorino makes it rather a wolf in sheep's clothing compared to the milder parmigiano, it is anything but a poor relation.