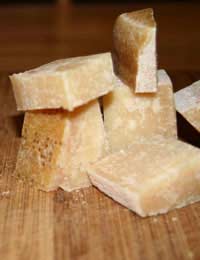 Any doubts as to the status of parmigiano reggiano as a luxury item were finally dispelled in the latter weeks of 2006 when media organisations in Europe began carrying reports of criminal gangs hijacking lorries transporting wheels of the mature hard cheese to retail outlets. One unlucky lorry driver reportedly stopped for a coffee at a service station on the Milan-Bologna autostrada and ended up tied up while the thieves made off with his transport.

What's so Good About Parmesan?

Parmigiano it seems, has joined the ranks of expensive watches, leather handbags and high-end electrical goods on the shopping list of unscrupulous individuals eager to make some easy money. However, one thing these people are certainly not guilty of is bad taste: the care and attention paid to ageing the cow's milk cheese results in a sweet yet salty, granular product that can make or break many a pasta or risotto dish. To the Italians in particular, such culinary power is well worth buying from under the counter.

Production is based on methods that have paid handsome dividends since cheese-making began in the area around the 13th century. The area in question is specific; namely, according to the consorzio in charge of quality control, “the provinces of Parma, Reggio Emilia, Modena, Bologna to the west of the Reno river and Mantua to the east of the Po river”.

The Curdling Process in Parmesan Production

Attention to detail is vitally important, milk obtained from the herds of dairy cattle required to arrive at the production plant within two hours of it being obtained from the cows. On average, it takes 16 litres to make 1 kilogram of cheese, while a whole wheel requires 600 litres. The process begins in copper cauldrons where rennet, specifically calf's rennet, is added to begin the curdling process. Once the resulting cheese mass has been formed in moulds, it is immersed in brine for a period of 20 days in order to introduce the salt necessary for flavour and to initiate aging. The wheel is then placed on racks where it begins a maturing process of at least 12 months, during which time it will be periodically turned, brushed and subjected to inspection to ensure that it is developing to the required standards.

Marks the Indicate the Quality of Parmesan

The wheels are stamped with the identification number of the individual dairy that produced it along with the month and year. One of several marks will designate quality and the rind also carries the distinctive stencilled parallel lines. Because the cheese is produced in accordance with European Union regulations, each wheel and packaged product is only an authentic product of the consorzio if it carries the designated stamps and seals, including the all important acronym DOP (Denominazione d'Origine Protetta) - this includes the ready-grated form sold in supermarkets.

Cutting also must adhere to specific techniques, namely utilising an almond-shaped implement that opens up rather than slices the cheese in order to protect its texture. The attention to detail at every stage of the process ensures that parmigiano reggiano continues to be one of the world's great cheeses, and a symbol of the importance that quality of ingredients plays in the success of any Italian dish.