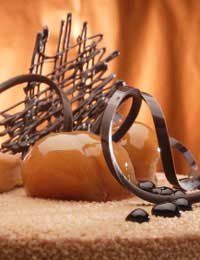 Chestnuts, chocolate and cream – there’s nothing like a little autumnal indulgence to make up for the drop in temperature and loss of daylight. But the combination wouldn’t be Italian if there wasn’t a drop or two of theatre added to the mix so that diners can feast their eyes on the cake before reaching for the dessert fork.

And what a sight to behold – not layered in a shallow dish like a tiramisù but rising up from a wide base to show-white peaks of cream that contrast with the chestnut brown flanks – a dish that is as much about altitude as attitude.

But even before your guests have seen for themselves the majesty of the finished pudding, its name offers a simple clue as to what they are about to behold. Not life-size, of course. Well, not unless you are planning to feed a small nation.

Monte Bianco, or Mont Blanc to give it the more familiar French translation, is the largest peak in the Alps, an iconic natural wonder best viewed from a distance, unless you happen to be one of those lovers of extreme sports who prefer crampons to croissants with their morning coffee.

Its brooding presence over the north-western regions of Piedmont and Lombardy was the inspiration for pastry chefs to create a dish in its honour, a majestic concoction relatively simple in its construction. In terms of ingredients, there are the aforementioned chestnuts (1kg) – choose the fatter marrone variety; a chocolate with a high cocoa content (100g, grated); and double cream (500ml). These are supplemented by milk (500ml), sugar (200g), a dessert spoon of cocoa powder, three tablespoons of rum, and a pinch each of cinnamon and salt.

Before going any further it should be pointed out that if you do not fancy the laborious task of producing your own chestnut purée – you have to boil the chestnuts, let them cool, then shell them before mashing – it might be an idea to substitute the raw ingredient for two tins of the processed variety (around 400g each), available from many supermarkets.

To your chestnut purée, add the milk, salt and sugar and simmer for a quarter of an hour, sieve the mix and add to it the cocoa, rum and cinnamon. The mix should then be refrigerated for a couple of hours. Then take a large serving plate and pass the mix through a food mill so that the strands of chestnut mix snake onto the plate. Keep moving the mill around the plate so that you build up the wider base upon which narrower layers can fall in order to construct the flanks of your monte bianco.

Return the ‘mountain’ to the fridge, taking it out about 20 minutes before serving. Before bringing to the table, pour over the double cream to create the snowy peak, finishing off with a dusting of icing sugar and the grated chocolate.

The measurements above should be sufficient for six people: remember this is a rich dessert so less is very much more; otherwise you run the risk that the evening will peak too early.

How to Make Traditional Sweet Ravioli