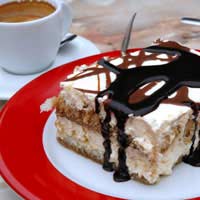 Coffee cream and some biscuits sounds like a reasonable offering for the dessert course, but the Italians not surprisingly have taken the combination and turned it into one of their most famous desserts, tiramisu, which translates as pull me up.

Whether the name derives from the addition of caffeine or simply the pleasure of something sweet and creamy is a matter of debate. The origins of this pud are also the subject of fevered discussion in certain circles. However, what is not in doubt is that when the tiramisu is on the table, the more serious business of eating leaves little time for idle historical chat.

The basis for tiramisu are lady fingers, or Savoyard biscuits, and the cream cheese mascarpone, both of which can be easily sourced from delicatessens and supermarkets. It can be constructed in individual glass bowls, or even large wine glasses in common with that other favourite of Italians with a sweet tooth, zabaglione. However, for this recipe, which will be enough for six people, a shallow oven-proof dish will suffice. It may not be as easy on the eye in terms of presentation, but who cares along as everyone has a generous portion to get their teeth into. Just carry to the table, arm the most responsible with a large serving spoon and begin handing out bowls filled with a generous portion.

A Large Packet of Lady Fingers

Let’s begin with the ingredients:Method

A Blanket of the Mascarpone Mix

Now it is time to assemble the tiramisu: