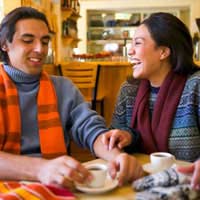 The large glass windows allow light to flood the room while the wood panelling bestows a formality that contrasts with the buzz of gossip that emanates from every table. Then there is the machine, always the centre of attention, churning out cappuccino, espresso, and hot chocolates that are destined to be accompanied by a morning pastry or an afternoon slice of cake.

The everyday experience of enjoying a snack in Italy takes on a theatrical quality when experienced in some of its grandest cathedrals of coffee, such as Al Bicerin or Caffe Florio, both of which have been plying their trade since the 18th century in the northern city of Turin.

The richly appointed interiors reflect the elegance of a bygone age, but their real beauty lies in the fact that rather than being the preserve of the city's nobility, as the décor may suggest, the rise of the café as an important part of the fabric of Italian urban life stemmed from the fact that people of all classes could assemble there.

All of Italy's major towns and cities can boast the equivalent of Al Bicerin, but the basic function that it performs is now replicated at innumerable and far more humble establishments on the corner of every street.

Cappuccino and a Cornetto

Every morning, as the rush-hour begins to gather momentum, Italians will crowd around the counters of bars, enjoying the kick-start to the day provided by a cappuccino and a cornetto, or croissant. There's no standing on ceremony, or time to take a seat, the aim very often being to be in and out of the bar in around five minutes. The same approach is taken during the course of the morning, business being punctuated by a quick espresso, again taken standing at the bar. It is only in the afternoon that time can be found to broaden the chat or enjoy some people watching through the windows or one of the larger and grander establishments.

Like breweries, some coffee producers are synonymous with their home cities, such as Illy in Trieste, JollyCaffe in Florence and Caffe Kimbo in Naples. One of the oldest, based in Milan, is Lavazza. As well as satisfying the domestic market, these companies enjoy success exporting to many countries around the world, adding to Italy's reputation as a guardian of all that is best about the art of making and enjoying coffee.

The Importance of a Good Barista

It is also responsible for heightening awareness of the importance of a good barista, or barman. Anyone who has given one of the commercial machines found in cafes and bars more than a passing glance will not be surprised to learn that it takes a certain level of technical ability to operate it. But once proficiency is attained, there is another level to reach in order to not only produce a cup of coffee but also one that gets the best out of the bean.

And given the cost of the machines it is not surprising that a great deal of importance is placed on finding and training the right staff. Certainly the generations of customers who have walked through the doors of establishments such as Al Bicerin have sat down knowing their coffee is in safe hands.