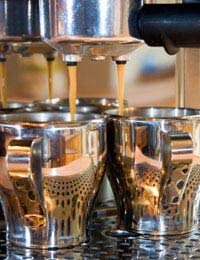 The earthy aroma of the ground beans and the sexy sophisticated image that the marketing men of the multinationals have bestowed upon the art of coffee drinking has translated into the area of domestic consumption, manufacturers falling over themselves to convince consumers that the design and efficiency of their machine is going to add that flavour of downtown Turin or Naples to their kitchen.

Leaving to one side the individuals so enamoured of espresso and cappuccino that they invest in a commercial piece of kit, it is safe to say that the average punter is not going to be interested in the finer points of semi-automatic lever models or even the merits of volumetric electronic dosing functions.

In short, the aim is to produce a reasonably authentic version of what is served in the average Italian coffee bar. Now, in common with pizza and, dare we mention it within earshot of the nutritional police, fish and chips, coffee never really tastes the same when drinking it at home.

For those interested in the minimal amount of effort, there are a number of models that incorporate an electric pump that will automatically force the water through the ground coffee and into the cup. Then again, some would-be baristas swear by the manual pump machines such as those made by La Pavoni. The unit plugs in to power the heating element within the water cylinder before the large lever at the top of the machine is pulled down manually to force through the water. A valve on the side of the machine can be opened in order to inject heat and air into a jug of milk when cappuccino is desired.

Both the automatic and manual machines are available in a variety of price brackets, but if budget is a key element when it comes to choosing a machine, there is no cheaper, and indeed more traditional, way to make espresso at home than opting for a Bialetti.

The aluminium Moka Express pot was introduced in the 1930's by Alfonso Bialetti who boasted of his invention that the public could enjoy “in casa un espresso come al bar”. The pot comes in four pieces, namely a tapered bottom that contains the water, a central barrel in which is placed the ground coffee, a metal filter surrounded by a replaceable rubber seal and an upper chamber complete with lid and spout.

To produce a finished coffee, simply fill the bottom chamber, screw the remaining elements together and place on a low to medium heat for five to six minutes, at the end of which the water at the bottom will have been transformed into coffee in the upper chamber.

For those wishing to make a cappuccino, the most simple method is to take an electric or hand whisk and plunge it into hot milk. Alternatively, milk pots complete with a hand-operated plunger and wire filter are available commercially.

While the big guns of Gaggia, Pavoni, Bosch and the rest battle it out for supremacy, it is nice to know that the humble Bialetti pot, complete with caricature of L'Omino, the little man with the moustache, on its flank continues to bring a little taste of Italy to households around the world on a daily basis.