Aperitivi, Digestivi and Other Mealtime Drinks 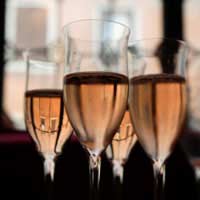 Harry's Bar remains a legendary destination for those visiting the city of Venice. Since it opened at the beginning of the 1930s it has played host to the rich and famous, as well as mere mortals drawn to it by the promise of great food, as well as the odd drink or two. Its former owner, Giuseppe Cipriani was the inventor of carpaccio, a plate of raw, thinly sliced beef that is now served in some of the smartest restaurants around the world.

Signor Cipriani is also credited with the creation of the bellini, the champagne cocktail that is always guaranteed to quickly relax guests before the business of eating begins.

As with the formal order of drinks served at meal time in other countries, the basic framework in Italy involves aperitivi to stimulate the appetite, a little wine to complement the individual courses, followed by coffee and the all important digestivi to settle the stomach after all that delicious food.

Prosecco and a Puree of White Peaches

Some of the most famous names in the international drinks industry earned their reputation from satisfying the thirst for aperitifs of members of Italian society. Both Martini and Cinzano vermouths hail from the northern city of Turin and trace their origins back to the 19th and 18th centuries, respectively.

Campari, an infusion of herbs and fruit with alcohol and water, is another invention of the 19th century, born in this case in that other powerhouse of northern industry, Milan. These stars of the Italian drinks cabinet will be dealt with in more detail in another section, and while there are hundreds of cocktails that could be chosen to get the proceedings underway, let's stick with the bellini. It was described above as a champagne cocktail, but in reality another sparkling wine, Italian prosecco, is usually preferred. To this is mixed the puree of white peaches, either bought commercially or blended by hand.

Once the food begins to roll out of the kitchen, the wise host will have the relevant white and red wines to hand along with a regular supply of water. There are a number of labels, both sparkling, semi sparkling and still, to choose from in the shops but, whisper it quietly in some circles, tap water does the job just as well, both in cleaning the palate and reducing some of the less desirable effects of the alcohol.

Stretching out the Evening

Following dessert, cups of espresso coffee are served, the short, bitter shot acting as something of a full stop on proceedings at the table.

For those who would rather stretch out the evening a little longer, then there are a number of digestivi that can be uncorked. Perhaps, a glass of Calabrian vecchio amaro, or Campania's limoncello, produced using only lemons sourced from the island of Capri, a flaming sambuca, or one of the many grappas that are the by-product of the wine-making process.

Those in a hurry could combine their espresso and digestivo in a caffe corretto, literally coffee corrected with a measure of alcohol. A more refined end to the evening might be a glass of vin santo, which the Tuscans traditionally take accompanied by an almond biscuit, not surprisingly now marketed in many countries as vin santo biscuits.