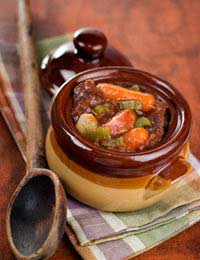 Boar have been roaming the forests of Europe for thousands of years and have provided a ready source of meat for princes and paupers alike. They may not be the prettiest creatures to encounter in the wild, but served up on a dark winter evening their meat can outshine many a more celebrated cut of pork or beef.

Combined with some root vegetables and a hearty red wine in a braise, the boar is rural cooking at its most majestic, providing a true taste of the countryside, whether that be Piedmont, Tuscany, Campania or Basilicata. Saute a soffritto of onions and carrots, then add some slices of pancetta chopped finely, then the pieces of boar tossed in flour. When the meat has caramelised, pour in a bottle of red wine, burn off the alcohol, and add whichever combination of vegetables takes your fancy along with some chopped sage and allow the meat to bathe in the wine on a slow heat for two to three hours.

Oxtail should be treated in a similar way, the meat again cut into pieces and allowed to braise. Either of these two dishes can be served with some slices of polenta, or even one or two humble potatoes. Similarly, if some goat can be sourced it should be braised in white wine with the addition of a chopped chilli, the seeds retained or removed depending on whether some heat is desired. Alternatively, leave out the chilli and garnish the finished braise with some toasted pine nuts to add an extra and interesting texture to the dish.

While the three animals above are unlikely to elicit any sympathetic noises from the assembled diners, many cooks shy away from presenting rabbit for the simple reason that the thought of tucking into a poor little bunny will have some guests using their napkins to wipe away the tears rather than the delicious juices of the meat. However, if the assembled throng are made of sterner stuff, this is an animal that hops into the pan with alacrity, although to be on the safe side, it may be prudent not to opt for this dish at Easter time.

To the soffritto (see above), add some floured rabbit pieces, either on or off the bone and braise in a bottle of quality white wine. In terms of herbs, rabbit marries as well with rosemary as chicken, but for a taste of early summer, some chopped oregano is a subtle but very effective option. Serve the rabbit with some sauté potatoes and some wilted spinach studded with finely sliced garlic and a pinch of nutmeg, or perhaps some salad leaves and some crusty bread to mop up the juices.

Rabbit also works well grilled or barbecued on a summer's evening. Marinade the meat for several hours in a combination of lemon juice, garlic and rosemary prior to cooking and serve with some salad leaves, squeezing a little more lemon juice on the sizzling meat together with a few grinds of the black pepper mill.