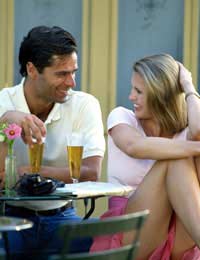 Whether sitting down in a pavement café in Turin or at the bar of a boutique hotel in Rome the chances are that the choice of birra nazionale is going to be one between Peroni and Moretti the two big brewers that slug it out for both sales nationally and a slice of the lucrative export market.

Outside Italy, Peroni is probably best known for its straw-coloured Nastro Azzurro, or blue riband, brand which took its name from the prize given for the fastest ship to cross the Atlantic. Through sponsorship, the company continues to develop its ties with sailing. By contrast, il baffo, the rather serious looking chap in the trilby whose name derives from his well appointed whiskers, is the star of the Moretti label.

While Moretti’s origins lie in the region of Friuli, specifically the town of Udine in the north-east of the country, the first Peroni factory opened its doors in Vigevano, Piedmont before operations soon after were moved south to Rome.

Purity of the Water

But while the two have been hogging the headlines for decades, another smaller-scale operation based in the town of Biella, again in Piedmont, has been quietly collecting awards for the quality of its products. The Menabrea brewery has been in operation since 1846 and currently produces a range of beers that include ambrata, bionda and doppio malto varieties, the clean taste of which is reputed to stem from the purity of the local water whose source is to be found high in the mountains of the region. The company’s success in winning awards at beer fairs has helped build an export portfolio that numbers around 20 countries.

The recent trend for matching beers rather than wines with food recipes led one beer of the month club reviewer to suggest that Menabrea’s 1846 export lager, reputed to possess a floral fruity character, should be matched with a plate of pasta with an arrabbiata sauce. This suggestion if nothing else would be enough to make certain experts of the grape rather arrabbiata themselves.

They would perhaps be even more furious if they saw some of the dishes the Moretti company was pairing with its products. Anyone fancy a beer with their risotto or tagliatelle with radicchio di treviso?

As well as their 4.6 percent standard lager, Moretti also produces beers that offer more of a challenge to the tastebuds. These include La Rossa, which boasts a sweet taste that is the result of production from malted barley, and a doppio malto with an intense flavour and seven percent alcohol content. Peroni also produces a doppio malto, labelled gran riserva.

For those worried that a glass or two of either of the latter will leave them with a rather bad headache in the morning, the Moretti company very considerately also markets a zero alcohol blonde beer. It may not have the kick of the rest of the range, but then again it does ensure you won’t be standing on a table singing O Sole Mio at three in the morning.