Home > Rice & Pollenta > Polenta and How to Cook it 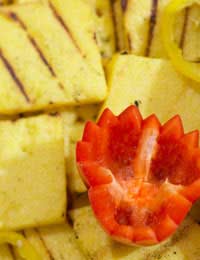 Polenta has been a staple of the rural northern Italian diet for hundreds or years. What could be a simpler source of nutrition than yellow cornmeal ground from the maize crops that grows in such abundance?In the past decade it has enjoyed its culinary 15 minutes of fame, appearing on the menus of some of the smarter restaurants of northern Europe but at heart it remains a robust alternative to potatoes when twinned with meat or fish, or on its own with the addition of a few extra layers of flavour.

Like pasta and rice, polenta does not make too many demands on kitchen utensils while a single large stockpot is all you are going to need to bring it to fruition.

For four people eaten as a side order, you will need:

Marriage of Corn Meal and Water

Presenting the Polenta in Strips

Processing the finished polenta very much depends on what you plan to do with it. Those who do not wish to stand on ceremony could simply issue it in large dollops on to the plates of the expectant diners. Presenting the polenta in strips, a popular method in restaurants requires simply pouring the piping hot mixture on to a metal tray brushed with a little extra virgin olive oil. Leave it to cool, and then cut into strips and heat up on a griddle pan to achieve those caramelised tiger stripes so beloved by presentation-conscious chefs.

Alternatively, pour the polenta into a glass bowl, leave to cool, scoop out the middle with a large serving spoon and fill with a vegetable-based or meat sauce and reheat in the oven or microwave.