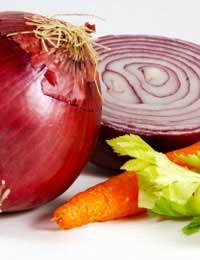 Soup is such a versatile vehicle for aromas and flavours that opens up many possibilities for the cook.This is as true in Italy as elsewhere, but wherever soup is made, there is one element that is constant: a good stock. That means in the case of meat eaters, boiling up the left overs of a roast or chicken carcass with a range of vegetables, or simply the latter if a simple vegetable stock is required or desired.

Given that many people have neither the time nor the inclination to make their own stock, the range of substitutes commercially available is substantial. The key is to get your hands on the best quality stock that you can.

Think Italy and soup and the word minestrone springs to mind. The word minestra means broth, in the case of this recipe it should mean specifically meat broth. To this is added onions, celery, carrot, potatoes, tinned tomatoes and some shredded cabbage. Towards the end of the simmering period of two and a half hours, add a portion of cannellini beans, and when the soup has attained a thickish consistency, serve it topped with some freshly grated parmesan cheese and some thickly cut bread. It should be noted here the lack of herbs in this recipe. This is because the soup serves to showcase the talents of the vegetables themselves.

As with many Italian soups, minestrone was designed as an essentially rural dish to provide fuel for the farmers in the field. The same is true of the basic pasta and bean soup. Again a meat broth forms the basis of the soup and is joined by pancetta, or bacon, onion, carrot and celery. Cannellini beans are added towards the end of the cooking process along with a quantity of a small dried pasta shape such as macaroni or ditalini. Again, parmesan is added over the finished soup.

Stracciatella is very much a soup synonymous with the region of Lazio. It involves taking three eggs and combining them in a bowl with some parmesan, a little salt and some lemon juice. Bring some meat broth up to boiling point in a large pan and add the egg mixture, beating vigorously before leaving to rest so that the strands of cooked egg rise to the surface. The result is as eye catching as it is delicious.

Given the proud culinary traditions and rivalry among the regions of Italy, many variations on the above can be found throughout the country. In Liguria, for example, the abundance of basil plants means it is not uncommon for the herb to be added to a basic minestrone recipe, giving that unmistakeable Ligurian twist to it.

Similarly, a chicken stock may be preferred to one of meat. This will obviously influence the flavour of the soup, and some purists may not approve, but ultimately it is down to individual taste. As long as the basics are adhered to, it is unlikely that the discerning Italian palate will find anything to object to.