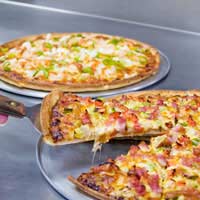 Pizza represents all that is great about Italian cooking. While Michelin-starred chefs are thinking up innovative ways to excite the senses, few can guarantee the satisfaction to be gained from the sight of a combination of a few fresh ingredients and some bread dough emerging from the inferno of a wood-fired oven.

The eating experience is made all the richer by the ensuing drama of the pizzeria, pieces of dough being stretched and spun by the prime exponents of the art, the pizzaioli, before being dressed and transferred by paddle into the flames, to emerge just a few minutes later, bubbling and slightly smoky around the edges.In Naples, they take pizza making so seriously that it even has its own professional body, the Associazione Verace Pizza Napoletana, based in via Santa Maria La Nova. Its mission is to safeguard and promote the disciplines of this culinary craftsmanship.

The Home of the Pizza

Naples is often cited as the home of the pizza because it was where the modern version of the dish was born in the latter part of the 19th century. A local pizzaiolo, Raffaele Esposito, was said to have produced a number of different pizzas to celebrate the visit to the city of Queen Margherita of Savoy. The version that was given the royal ascent was one featuring a combination of tomato, basil and mozzarella, ingredients that reflected the three colours of the Italian flag.

Tomatoes were a relatively recent feature of the Italian diet, having being introduced by explorers returning from the New World, but they provided the great leap forward in the popularity of pizza as they had done for that other great staple of the nation's diet, pasta.

Up until the arrival of the tomato, pizza was essentially a version of flat bread that had been produced for thousands of years. Some historians cite its origin in ancient Greece, while the Etruscans and the Romans are also said to have left evidence of the existence of rudimentary pizza making.

What is not in doubt is the momentum that good Queen Margherita gave to pizza. Like pasta, it is a universal food, although whether it has translated well on its journey around the world is a matter for debate, particularly when it deviates from the traditional thin-crust bread base. Not unnaturally the Italians, and in particular the Neapolitans, claim it as their own. Sauces and ingredient combinations are many and varied but it comes into its own when care and attention is paid to getting the basics right.

To that end, there are a number of training courses for those interested in making a living from being a pizzaiolo, which include instruction on ingredients, managing a pizzeria, as well as how to turn the art of dough making into a spectacle to keep the customers entertained while they are waiting for their food.

Pizza may not make the menus of Michelin-starred restaurants but it is a dish that will retain its celebrity long after many others have enjoyed their 15 minutes of fame.